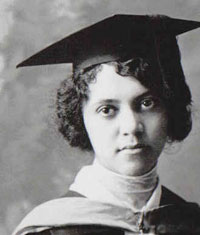 From Leprosy to Sickle Cell: A Focus on African Americans in Medical Research

This photo of her is from the Univ. of Hawaii… I think it’s public https://scholarspace.manoa.hawaii.edu/retrieve/10015

Alice Augusta Ball was an African American chemistborn around the turn of the last century. She had college degrees in both pharmacy and pharmaceutical chemistry under her belt by the age of 23. Ball was working on her master’s thesis at the College of Hawaii when she was approached by Dr. Harry T. Hollmann, U.S. Public Health Officer for Hawaii, to ask if she could help him solve a problem.

For hundreds or possibly even thousands of years, a diagnosis of Hansen’s disease (commonly known as leprosy)meant exile. For lack of a better alternative, many of those who came down with the disease were sent away to an isolated location to await death. They didn’t necessarily die of the disease, but with no cure and no effective treatment, lepers (the term used for those with the leprosy) never recovered and were never allowed to leave the leper colony.

In the Hawaiian Islands, those who were found to be infected with the disease were sent to a small, isolated peninsula on the island of Molokai. That’s where Alice Ball comes in.

Solution to a Centuries-Long Problem

From around the 14th century and on, it was known that chaulmoogra oil, from the seeds of the chaulmoogra tree, could heal people afflicted with the disease. The problem was that for roughly 600 years nobody could figure out how to effectively use it. The oil was not suitable for injection and was too bitter to be taken in by mouth (and kept down).

Then along came Alice, a 23-year-old with a knack for benzoylation and a published paper to prove it. It took her just a year after being asked by Dr. Hollmann to solve the problem. Utilizing benzoylation she turned the viscous oil into an injectable solution.[1]

Under-recognized to this day* and even denied acknowledgment for years, Alice Augusta Ball had found a way to convert the medicinal plant’s extract into an injectable, water-soluble solution. Although it wasn’t perfect, her discovery allowed people to be able to leave the leper colony and return home and was the best available treatment for over 20 years.[2]

Less than a year after her discovery, a teaching demonstration she was conducting involving chlorine gas went wrong and Alice Ball lost her life as a result. The college president, a man by the name of Arthur Dean, took over her work, and as was common at the time with women, he took all the credit. He even renamed her technique, the Ball Method, after himself.

Dr. Hollmann gave her credit about six years later in a published paper. It wasn’t until recent years, however, that Alice Ball has received recognition. In February 2000 former lieutenant governor of Hawaii, Mazie Hirono, declared February 29 to be Alice Ball Day.

This February 29 be sure to remember Alice Ball and her contributions to medical science.

A pioneer in sickle cell research, William Warrick Cardozo was dedicated to helping his community.

Discovery of a Genetic Link

Dr. Cardozo conducted research on Hodgkin’s lymphoma and gastrointestinal disorders in children. His most notable work, however, was his research and October 1937 publication of “Immunologic Studies of Sickle Cell Anemia” in the Archives of Internal Medicine. Through his research, Cardozo had found the genetic link and heritability of the sickle cell trait based on Mendelian genetics. He figured out that the disease predominantly affected people of African descent and that it didn’t always cause anemia or result in death.

His discoveries opened the door to further study and subsequent development of treatment options.

William Cardozo was a true giver. Among his many seats held and contributions to medical science, he was a public school medical inspector, a fellow of the American Academy of Pediatrics, and a member of the National Medical Association. He was also the sole volunteer medical caregiver for the Ionia R. Whipper Home for Unwed Mothers, the only one of its kind in D.C. for African American women.[4]

Upon his death, an editorial in the Washington Star on August 17, 1962, stated that Dr. Cardozo had “little interest in honorary titles.” Titles or no titles, he left his mark on the local and African American communities as well as the world at large.

With gratitude and respect, we at PathSUPPLY honorthese andall African American scientists, researchers, lab and medicalprofessionals… past, present, and future… whodedicate their talents and gifts to improving the lives of patients.

Check out PathSUPPLY or call us at 800-631-3556for your pathology and laboratory supply needs.

PathSUPPLY. Helping those who help patients.

*Note: Even today, Alice Ball and her contributions go unrecognized. During our research for this article, we found a website dedicated to Hansen’s disease with a page on its history. It makes no mention of Alice or the treatment she developed despite the fact that it helped people with the disease for decades.

From Leprosy to Sickle Cell: A Focus on African Americans in Medical Research